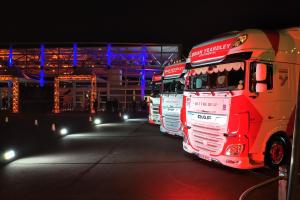 Arriving through the trees south of the river, through one of London’s leafy parks, you might not expect to stumble into most of the UK live events industry at one of London’s newest and most effective corporate event spaces. A big clue as to what was going on inside Battersea’s Evolution venue behind the brightly lit façade and unusually sharply dressed guests, were the three Mercedes mega box trucks parked outside, in their full livery courtesy of TRUCKINGBY Brian Yeardley. The annual TPi Awards – hosted by TPi Magazine, were getting underway and representatives from all sides of the business were there to share a glass or two, catch up away from the usual business agendas and celebrate and recognise special achievements and contributions and to enjoy the usual high standard of production design and hospitality. We were honoured to be invited this year by our friends at Nexo to join them and members of the Yamaha Commercial Audio Europe team for this annual get together for the live events industry.

The evening’s entertainment followed the now established Daytime TPi networking event held during the day, which also included the AGM of the Production Services Association (PSA), chaired by PSA GM, Andy Lenthall as well as a presentation and discussion on the TPi Business Leaders Report which was sponsored by AVIXA.

Very soon once inside, the drinks and the chat flowed freely, and as always it was clear that this is far more than a local UK event, with a distinctly international flavour to the attendees. Within minutes we were meeting with representatives from Rental Pro and Media AV in the Czech Republic, VDB PA and Audio XL in Belgium, and PogoArt in Poland as well as business owners from the USA who regularly choose to make the trip to be part of this very established industry event, now in its 17th year.

Over 1600 guests were catered for by an extremely slick team at the venue, serving a very fine dinner in what seemed like the blink of an eye. The venue looked stunning with lights and other effects provided by Robe and Varilite, and the tables all had the opportunity to participate in the ever popular ‘Glow-Stick challenge’.

Sound for the night, courtesy of Derby-based Sound Of Music, Nexo and Yamaha and designed by MD Sash Pochibko, was impressive from the start, whether in the bar (which was lively but where you could still hold a conversation), or in the main room, where it seemed to strike all the right notes without drowning out the presenters or dinner table chat.

The show was mixed by Toby Chevi with the main system featuring NEXO GEO M12, along with GEO M10 and M6 for fills and sides with a healthy deployment of S118 subs. Frontfill and outfill were provided by NEXO’s super-compact ID Series point-source cabinets.

UK comedian Romesh Ranganathan delivered the after-dinner entertainment and warm up to the awards themselves, with an amusing theme around the joys of parenting as well as a clear instruction to all winners not to attempt to actually speak directly with him as they collected their awards!

This year’s Outstanding Contribution award went to Paul Hartley from TMB. Like many in our industry, Paul Hartley began his working life as a musician before he went on to found and lead TMB UK for over 20 years, and also take a lead role within TMB worldwide, until his recent retirement.  Paul’s geniality, humour, and eagerness to help have made him one of the most popular individuals in our industry.

If the mood on the night was an indication of the state of the UK live events industry, then we have plenty of good shows to look forward to this year. Next year we will gather again amongst the quiet leafy seclusion of Battersea Park and look back on whatever 2019 has in store…. Thanks to Nexo, Yamaha, Varilite, Mondiale Publishing and all of the other event sponsors for a great evening.