Object Lessons in Frankfurt for Prolight+Sound and Musikmesse 2019

At ProLight+Sound this year the mood once again was initially one of scepticism, prompted by the diminution of exhibitors and visitors that has clearly continued from last year. This was compounded by a largely unpopular move for pro-audio from Hall 3.1 to Hall 8.0 just as the cohesion of audio and lighting under one roof in hall 3 was starting to be appreciated. But that’s been typical of Messe’s habit of tinkering with the formula and the format every year, under pressure to keep all the plates spinning as the markets fluctuate.

Another so-called consolidation this year was the exact concurrency of PL+S and Musikmesse, ostensibly to reflect the convergence of music making and music production. They needn’t have bothered. PL+S might just as well have co-ordinated with Baby & Stroller China for all the synergy generated: Sadly, Musikmesse is fading like the last chord of Sgt Pepper’s Lonely-Hearts Club Band. Dominated by Asian manufacturers, in a space not difficult to dominate, Musikmesse seems to have lost touch with almost all of the famous European and American brands that once made the show an unmissable fixture on the trade calendar, as if finally marking the end of the era of rock and roll. Yes, accordions will still find their way to retail outlets in Feldkirch and Drogheda, and more Spanish guitars have never been plucked in one room, but in Frankfurt at least the MI industry has found a new place to dwell – down at the end of lonely street. 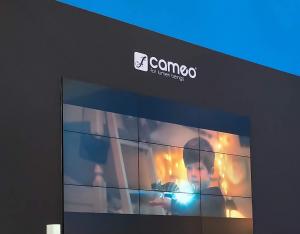 Lighting and sound, meanwhile, are in rude health. Hall 12 flashed and glowed with all the fun of the fair, while despite the grumblings Hall 8.0’s audio population found some genuine breakthroughs. Funktion One launched VX, a more compact spin-off to flagship loudspeaker concept Vero; Coda Audio continues to go from strength to strength, proven by a generous booth only out-done by the commanding presence, right in the centre of Hall 8.0, by Adam Hall: the German entertainment technology group had plenty to say. Apart from launching the new Touring Series of rental inventory stands for mics and instruments on stage, under the Gravity badge, there were image makeovers for the LD Systems audio range and Cameo lighting – with the rather splendid new slogan “For Lumen Beings”. Cameo’s re-brand was accompanied by a high impact and quite moving video which played on loop cinema style at the centre of their grand palace of a booth, which featured the story of a young boy who is fascinated by sparks, fire and light who grows up to enjoy a successful career a an international LD. Its good to see an established brand thinking a fresh about how to engage with its customers around the world.

We were also impressed by another German manufacturer, Holoplot, which continues to develop a beam-steering technology called Orion, a platform well timed for the emerging immersive audio processing sector. UK-based Out Board kept in touch with this market – one that it effectively invented – by announcing Tracker D4, a much lower cost-point at which to add 3D tracking to your show control automation. Indeed the immersive audio bandwagon rolled on, now joined by Meyer Sound who took full advantage of a brand new facility called Portalhaus to host regular demonstrations of Spacemap Live – technology not new but repackaged for concert and touring and a direct response to the impact of d&b audiotechnik’s Soundscape and L-Acoustics’ L-ISA systems – both of which had regular impressive airings in different parts of these sprawling fairgrounds. All use the comparative freedom of object-based audio to achieve a new paradigm in live mixing and audience experience. This alone is clearly injecting enough adrenalin into the market to keep PL+S on its much-trodden toes for a while yet. And the sense with immersive and 3D audio is that we are only just starting to glimpse the start of what is possible and yet to come. As a hint of this we particularly enjoyed Grammy Award winning artist Imogen Heap’s highly personal and moving presentation of her music in collaboration with d&b Soundscape and featuring her innovative Mi.Mu gloves which she uses to control sound, reverb spatial audio and more with just a gesture or click of her fingers.

Back on the main show floor in the audio hall we were slightly bemused to find UK audio console market leader DiGiCo, given MD James Gordon’s valedictory remarks at the start of the show last year. But just as we said a year ago, DiGiCo must have been assessing the wisdom of these remarks four days later as here they were again. Marketing Manager Maria Fiorellino confirmed that the original decision was reversed last year after four days of successful business – in spite of DiGiCo’s prior commitment to ISE and continuing support for NAMM. It must be so hard to let go, after all this time. But next year we shall have to wait and see as there were similar noises off this time around…

If you are currently looking to strengthen your business team or are considering your own career progression and potential opportunities for development and would like to have a discussion with one of our team, please follow the links below to get in touch with us.

Object Lessons in Frankfurt for Prolight+Sound and Musikmesse 2019